Father John F. Mullany, the First Pastor of the new, and soon-to-be large parish of St. Paul's was able to acquire property in Whitesboro, in New Hartford and in Holland Patent in less than three years.

On October 21, 1883, the cornerstone was laid at St. John's in New Hartford at 1:00 p.m. and at St. Paul's in Whitesboro at 3:00 p.m. No clear date of dedication for St. Paul's has ever been established. However, it was "filled with a large congregation" (noted from a newspaper report) for Confirmation on May 31, 1885 when the church was complete.

The original St. Paul’s Church served the parish well for more than three-quarters of a century. However, in about 1950, with the increase in Catholic population it became more difficult to accommodate the large numbers of people. When the school was completed in 1956, immediately 3 additional masses were added each Sunday in the school social hall. 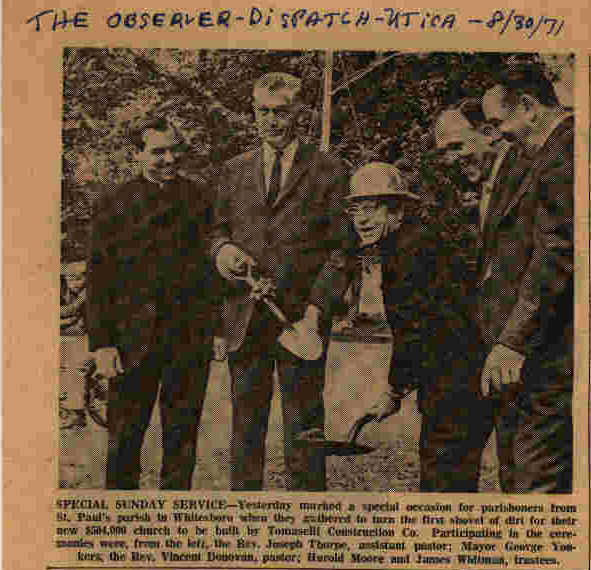 Consequently, in the fall of 1970, it was announced that a new church was to be built. The plans of the church were developed by the Pastor, Rev. Vincent J. Donovan, Mr. Harold J. Moore and James A. Widtman, Trustees, and the Parish Council with J. Douglas Leahy as Chairman.

Ground for the church was broken on August 29, 1971 and the church was solemnly dedicated on Sunday October 8, 1972 by Bishop Cunningham who was surrounded by many clergy, religious, civic officials and a large number of parishioners.

On October 26, 1997 we celebrated our 25th Anniversary Celebration of the New Church.  Again many area clergy, past priests of St. Paul's, civic officials, and a large number of parishioners attended this special celebration.

Here are some pictures from that day, that shows the beautiful sanctuary of our church.

Our sanctuary was decorated with flowers, banners and a harvest full of fruit.

Former priests and area clergy join in the celebration. 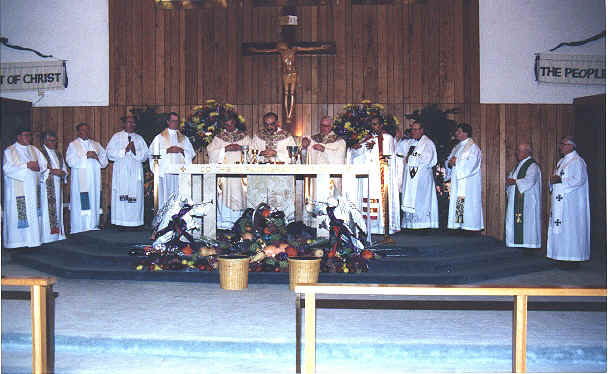 Do this in remembrance of me.... 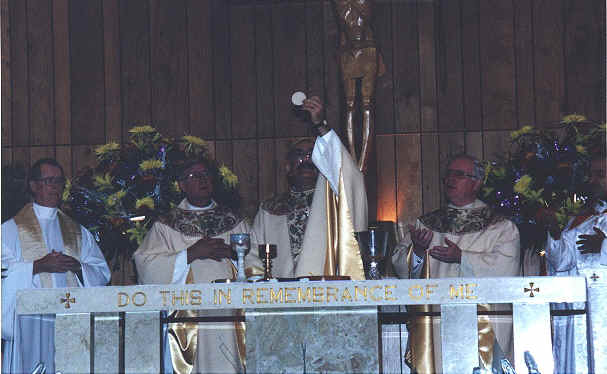 Our church was filled with Praise & Thanksgiving as Helen, our Cantor leads the congregation in song. 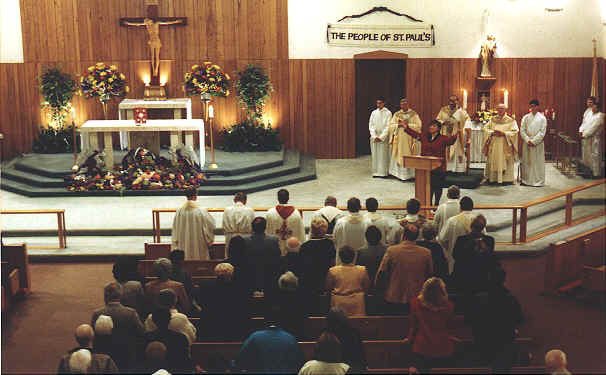 Rob the high climber, from World of Color paints the peak at the altar inside the church.